A lion befriending another animal isn’t something to hear very often, but with the men’s best friend it never knows. Everyone knows just how incredibly friendly dogs are, and this time a massive white lion taste a bit of a dog’s camaraderie.

In a short charming video a chocolate Lab approaches a white lion in his enclosure and what happened next won the hearts of millions. The unlikely pair seem to shake their paws. Then with an extremely sweet gesture, the lion appears to ask forgiveness from his buddy by kissing her tiny paw. The adorable footage earned over 30 million views since it was shared on Youtube. However, the tender scene did not happened by accident as the two are lifetime companions. Miki the lion was rescued in 2016 and brought to the Black Jaguar-White Tiger Foundation – a Mexico-based nonprofit specialized in big cats rescue. The massive animal was raised and kept in an apartment just like a regular pet. When found him, Miki was sharing his home with a tiny lab named Camila, so they have been both taken to the shelter.

Since they were raised together, Miki and Camila naturally share a very special bond. Aware of that, the staff at the shelter did not think even for a second to separate them. “[They] have been together all their lives, way before we rescued them,” the staff said. “And if they’re not together, they get super nervous.” It is very common for wild animals that are raised in captivity to form close friendships with other animals they would have been naturally avoid in other circumstances. But these unlikely friendships between animals of different species are nothing but a wonder of the world we live in. 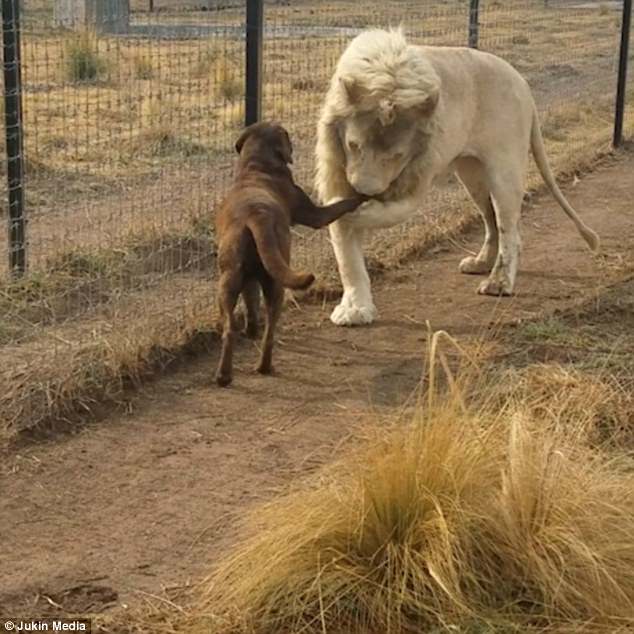 “An amazing bond between two friends since they were young,” the video captions. “A mighty white lion and chocolate lab. Watch as the lion goes and kisses the dogs paw.” Have a look: